Everyone remembers the news story from around 2009 when scientists first discovered they were receiving nearly 50-year-old TV signals back from deep space after they apparently bounced off of something and were returning to us. With that in mind, I wanted to do a project where I would build a radio that could only receive old radio signals from the "Golden Age" of radio.

I have no intention of communicating with the old radio signals like they did in the movie Frequency, I just want to receive them. I was born too late to really take advantage of the Golden Age of radio so I'd like to experience that now and since those radio waves are still traveling out there somewhere, I figure I can pick them up with my radio.

I have finished the main "guts" of my radio and am now looking for a suitable cabinet for it. I'd like it to be some sort of old-time radio cabinet which I think may actually enhance the signal.

Here is video of my old-time radio guts in action.

A photo of the prototype guts for the new radio case. 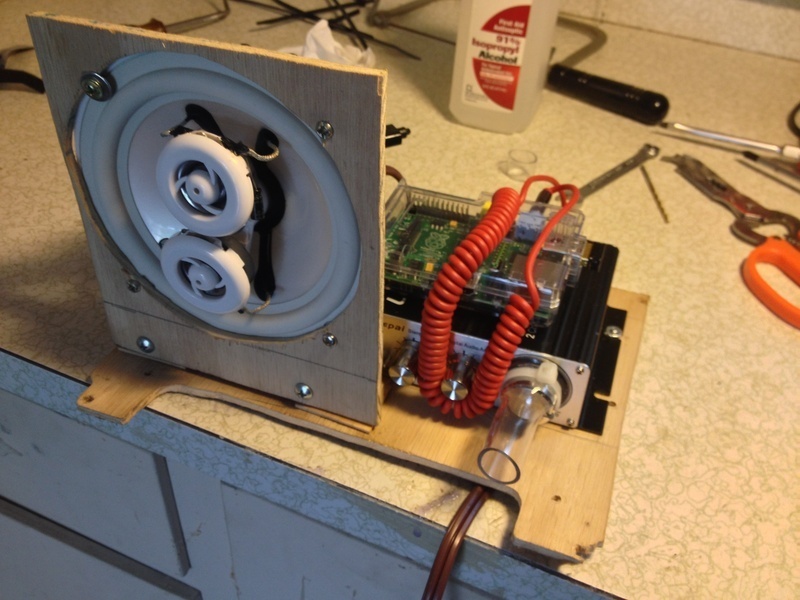 If this project is successful, I may try my hand at building a radio that receives radio signals from the future. It's basically the same idea, but I will have to point my antenna in the opposite direction.

And this (below) is the finished Time Machine, my Golden Age Radio Receiver! It looks like an ordinary radio. It's an old radio, for sure, but with new parts. Anyone familiar with an old tube radio remembers that they have a reddish-amber glow when powered up due to the lighting of the tubes. The tubes gave the old radios a warm appearance. My Golden Age Radio Receiver, however, has a cold, bluish glow to it. That's because there are no vacuum tubes used and certain "agreements" had to be made with the "colder" forces of the universe to get this thing to work!

Nonetheless, it is an educational device that has already brought me hours of enjoyment, entertainment and learning. You can watch the demo video below. It's not the greatest quality because it was shot with just an iPhone and uploaded to youtube after minimal cleanup. I literally sat around videoing the time machine hoping it would stumble upon something interesting. I have no idea what it will play from one minute to the next so I never know what I will hear from it.

Youtube is upset that there is a brief period of music in the video so they may put ads around it. I was lucky enough to capture a small portion of a WWII song so I left it in. It is history youtube, I'm not trying to profit from it!

Recently I completed my second, in a probably growing line of OTR projects that use the Raspberry Pi as the internal smarts. With this one, like the previous one, I was able to keep the standard volume control knob active but one can also move the tuning dial and needle around (though they have no effect on Internet radio stations).

Here we are in mid build. 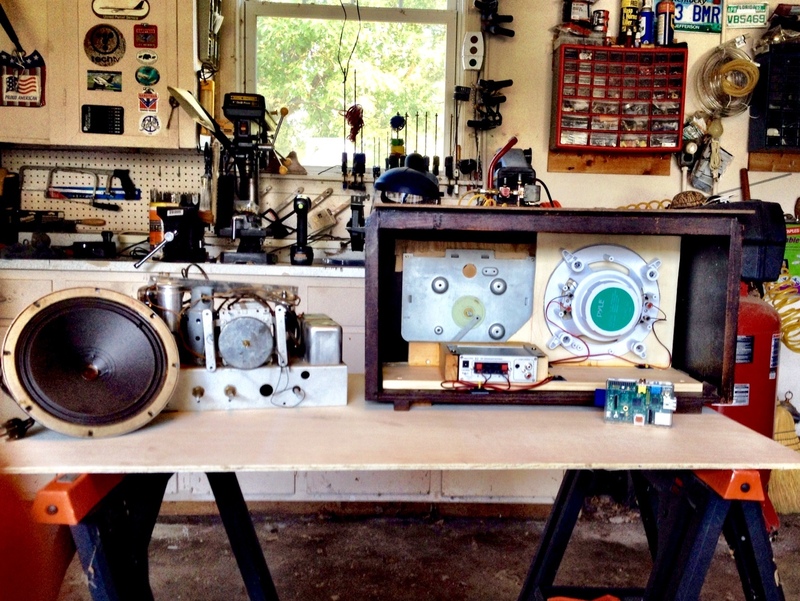 One of the features of this build is simulated vacuum tube glow, provided by a Hue Light Strip. Note that this only makes sense if you already have a Hue installation at your house or wherever the radio will be used. It came out a little brighter than I anticipated, but the Hue Light Strip can be easily controlled to limit brightness or to change, well, hue! I actually use the radio as somewhat of a nightlight because the light is controlled independently from the sound.

I usually use a toned down version of this color light when the radio is playing. 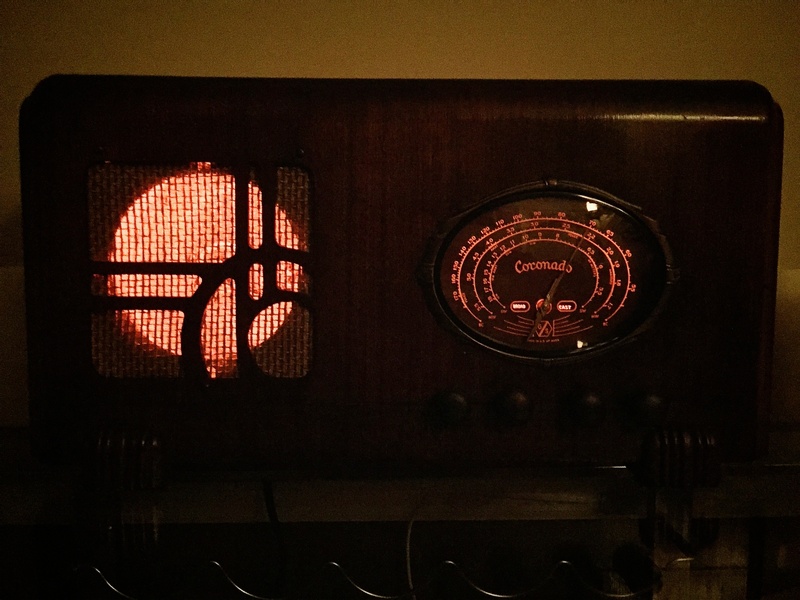 But, as you can see here, nearly all colors are possible. 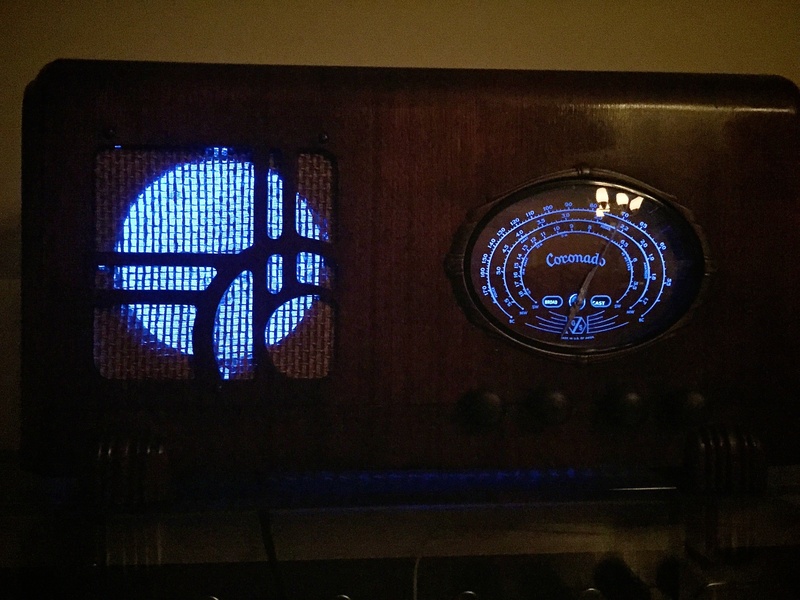 And, finally, here is the radio in action.

Both radios, since they are using the Linux Music Player Daemon (MPD), can be easily controlled with Theremin on a Mac, or MPoD on an iPhone or MPaD on an iPad. The MPoD software is free but there is a small fee for MPaD. I'm sure there are other clients for Windows and Android, I just never had the need to go and look for one.

I added to my radio collection again in 2017 with the addition of this 1962 radio from GE. It is packed with music and historical references to the 1960s. It also has a few internet radio stations that only play music from the 1060s and 1970s. 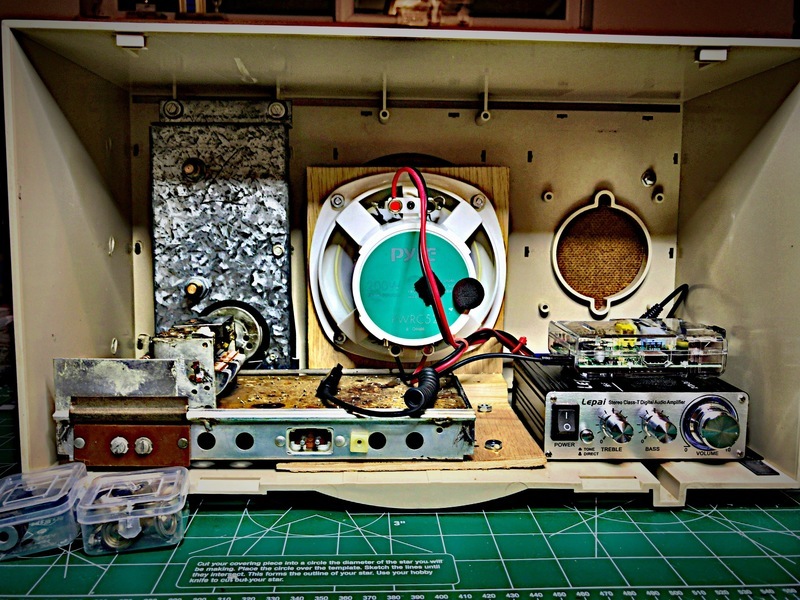